It is a little hard to believe that is has been nearly two years since the launch of the University of Arizona’s OSIRIS-REx and I was able to create a coloring book for the launch. I’ve always been fond of coloring books and space flight so I can cross this off the list of projects that combine one or more passions. For more information check out nasa.gov/osiris-rex as well as the UA’s site osirisrex.arizona.edu

The coloring book provided the challenge of distilling the concept down to something a 4 to 6 year old would understand, making the drawings both communicate what will happen as well as fun to color, and then I didn’t want to leave older children out so I created the informational page on the back side. A pdf of the coloring book is here. 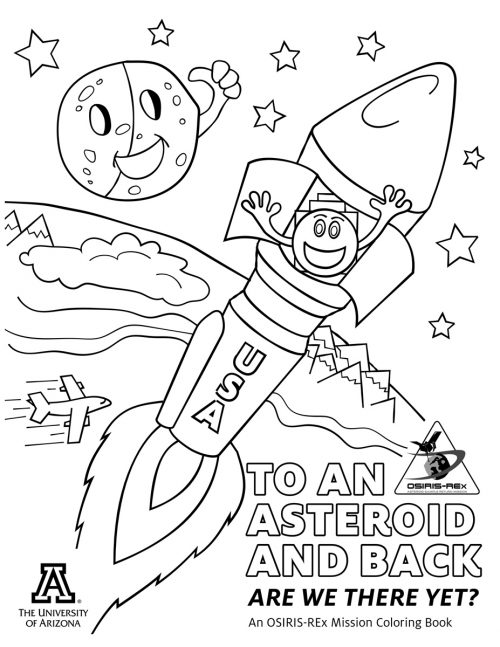 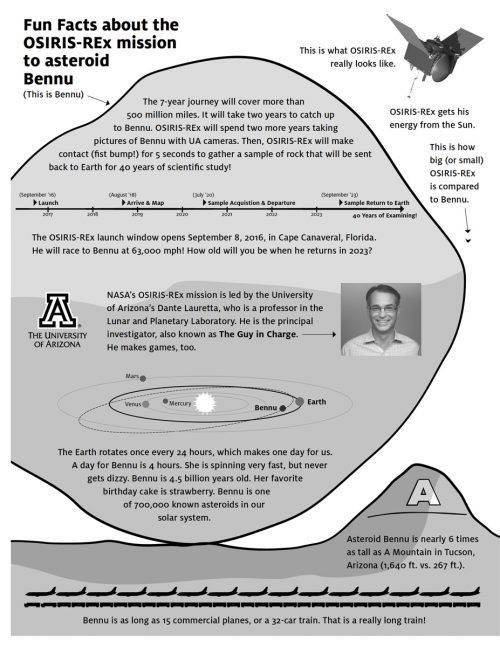 This set of logos were part of the first round of concepts for updating the event logo. Starting in black and white can uncover the flaws that are easy to cover up in color. 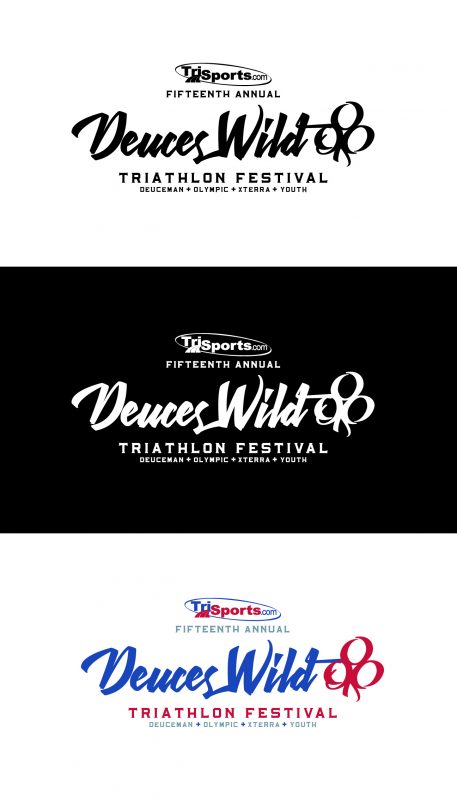 Now that the 2015 card has been released, I’ll post the 2014 holiday card for University of Arizona Student Affairs & Enrollment Management. To get the best experience, click on this link with a mobile device as the snow globe shakes and new scenes appear when you tap it. Nerd fact: the original animations all had to be under 200k to flow through the mass email system, and that ain’t much. cool fact: won a Silver Addy for this. 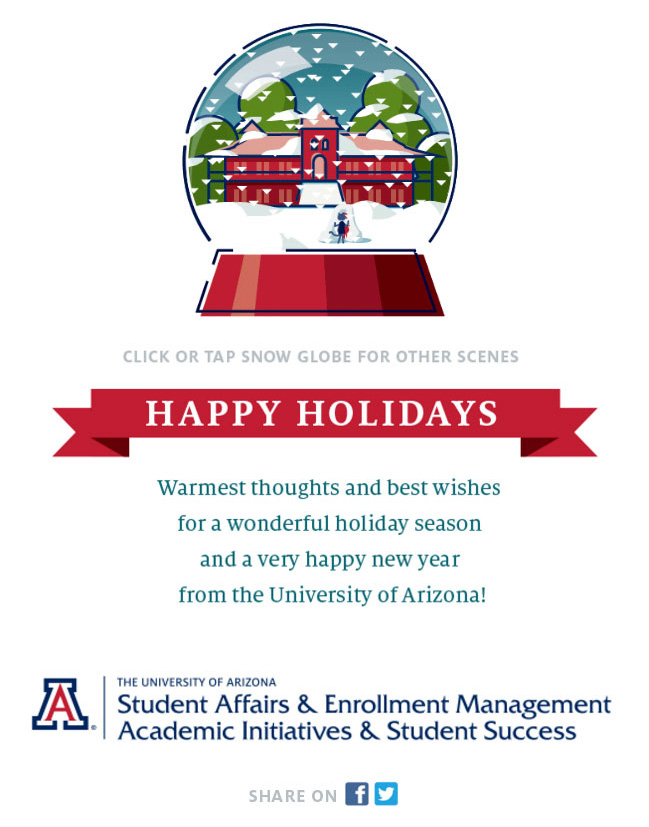 This just about says it all, though I will quote from the book “Rocket Men” referring to those that have gone into space:

“They have something, a sort of wild look. I would say, as if they had fallen in love with a mystery up there, sort of as if they haven’t got their feet back on the ground, as if they regret having come back to us… a rage at having come back to earth….. did you know that for months [they] went around looking at the sky? You could speak to them and they didn’t answer, you could touch them on the shoulder and they didn’t notice; their only contact with the world was a dazed, absent, happy smile. They smiled at everything and everybody, and they were always tripping over things. They kept tripping over things because they never had their eyes on the ground.” 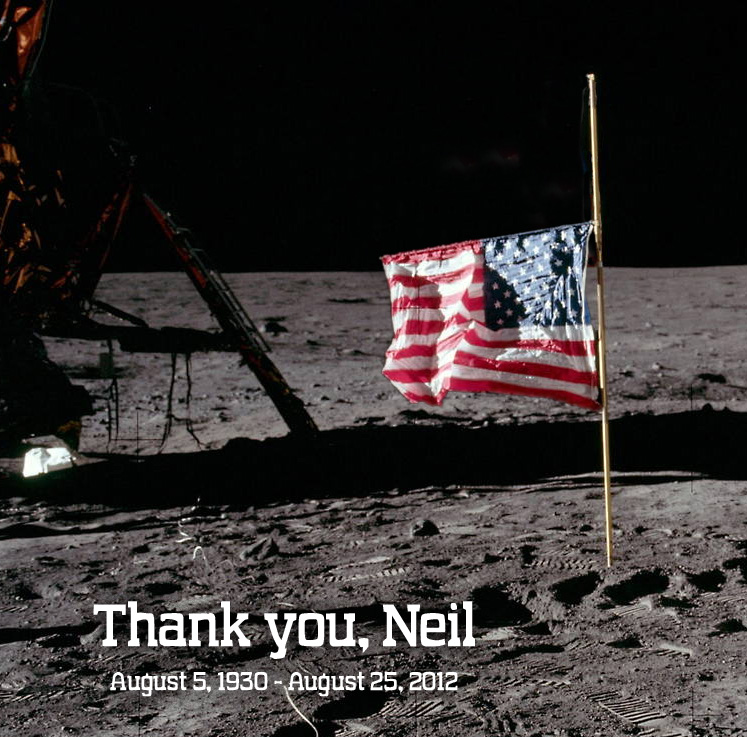 Bianchi’s Italian canvassed the neighborhoods near them with door hangers we designed and produced for them. It needed to be eye-catching and it had to hold a lot of information. Bianchi’s is another Tucson original, first opening in 1977 and now run by their son. Using some earthy imagery evoking old Italy and sharp use of the green/white/red of the Italian flag resulted in an attractive door-hanger. Each coupon is readable at a quick glance. Just looking at it makes me want some garlic bread for a mid-afternoon snack. 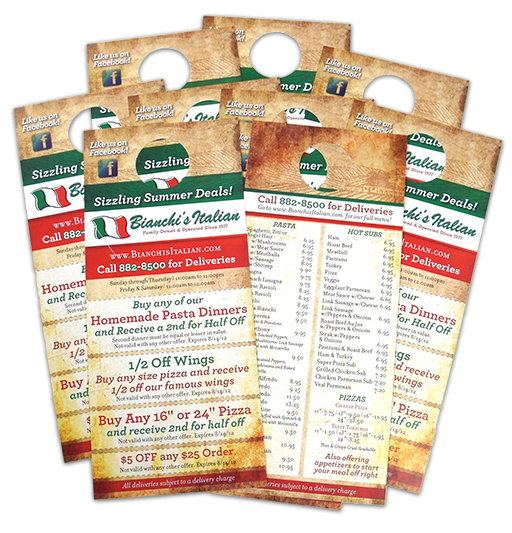 Here is a free calendar from a photo of pavers I have been saving for a few years and had yet to find a use. Throw in some perspective via Illustrator’s perspective tools and now it is a hopscotch game that would not be all that easy to complete. Click on the image below to get the full size image for your desktop. 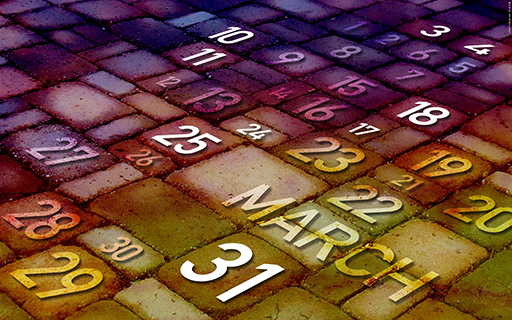 With this year pretty much wrapped up, I am not only looking forward to continued the partnership with our clients where I get to help them succeed, but also thankful for the very very full year where I have done just that: helped people succeed. I will be posting more in the coming months about this process that I enjoy, and it has been a great year. There were the usual projects, the logos, illustrations, posters, newsletters, email blasts, vehicle graphics and so on, but there were some new ones as well. There was the 240 page book now being sold everywhere, several business proposals that help land 150 miles of rail line in Oregon as well as a spot in a huge retail chain that I can say nothing more except that it is one a story of a small business hitting the big time in a big way. How can that not be exciting? There were other books as well, paired with music cds [there were lots of those] and a lot more cycling jerseys and race clothing. Add into all of this a personal project of adding onto my home where I was able to spend time on deciding how the space was to be used which included a 3 foot by 12 foot walk-in shower. Maybe better than that was laying 1800 sq ft of slate tile. It may seem crazy, but I sorted, piled, and chose where each uniquely colored stone was going to rest for the next 30+ years. I don’t often get to sculpt or build things, so this was a bit of a treat. A long, tiring, knee-busting treat. Nearly every surface of the interior has been painted a different color, but that may be what I do best: color. The early morning sun lights the main room on fire, calling the family to curl up on the couches and enjoy. After a whole year of a lot of destruction, there was plenty of construction for the family to enjoy.

Yes, it has been a good year for getting a lot of work done. I wouldn’t have it any other way. Thank you for letting me create for you – 2012 should be even better. 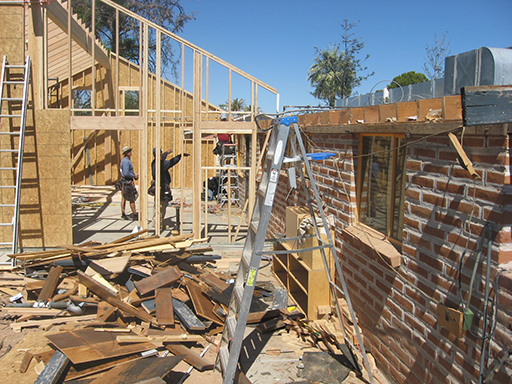 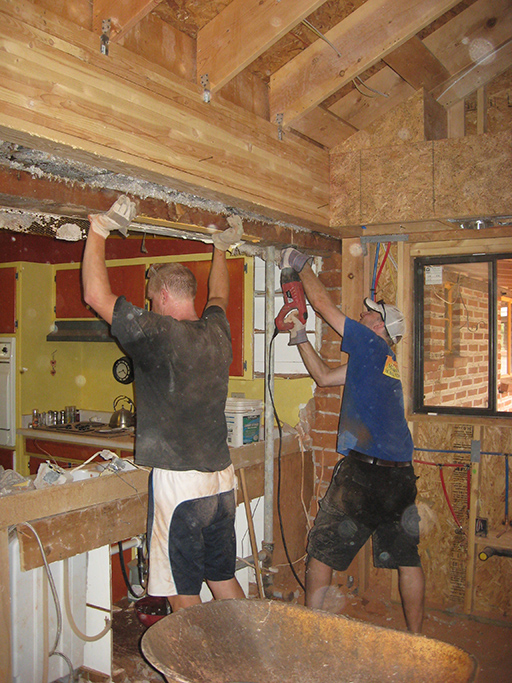 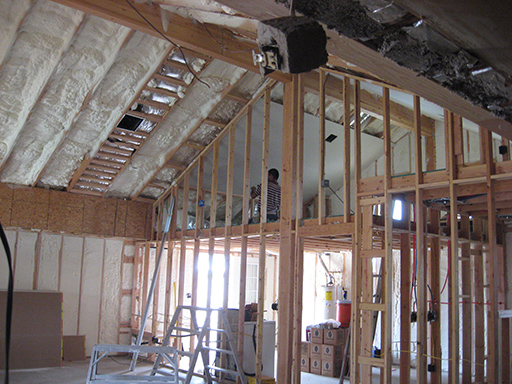 This is our 14th wall calendar in a row, with some of the prior years being much funnier than others. Last year was all about the 50th anniversary of man in space [go Yuri!], and this year it is about the Olympic games. It also has a bit of the sailing theme as we happen to be sponsors of the U.S. Sailing Team. Go, er, floaty-boats! Okay then, first up: get the sailing team a mascot so that cheering is more than just “Go U.S.A.!”

Let us know if you want a calendar [and are local] or we can let you know when we are done with printing them and you can swing by and pick a few up.

Click here for a pdf version that is easier to read, but sorry, you can’t print it out. We aren’t scrooges, we just know that the final calendar is going to be much better than what can be printed out on an office printer. 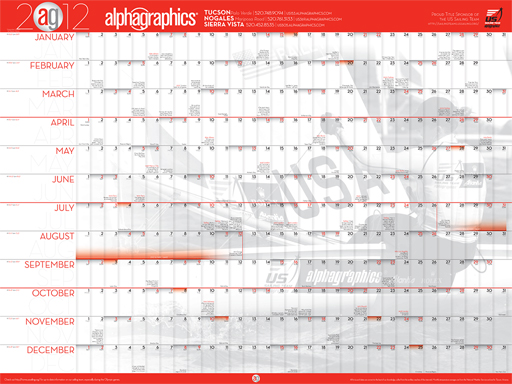 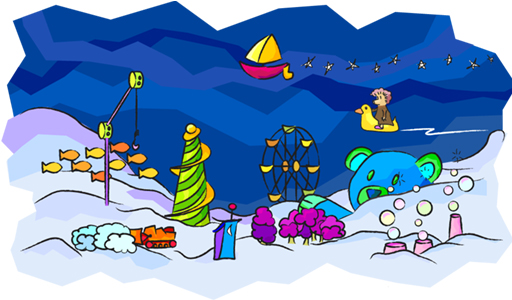 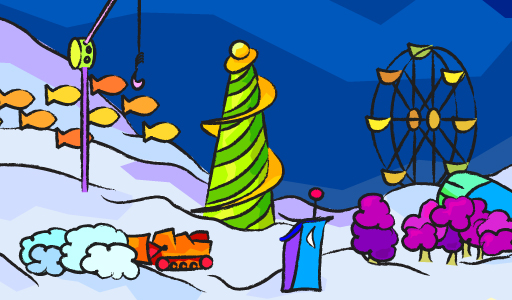 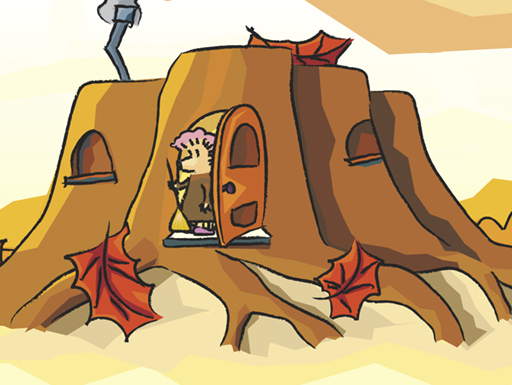 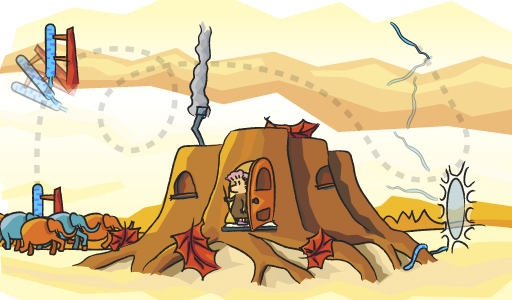