Just a week ago or so I was commenting on a bike ride that it was almost El Tour de Tucson time and that the weather should be going from «hot» to «just about perfect». Going along with the «If you think it, you will get the call» idea, I was informed of an upcoming magazine article about the art of the El Tour de Tucson bicycling event and that two of my posters were requested to be included. Then they asked for a third, so went back to my archives to pull the digital files [but not the 2006 poster previously detailed in this blog].

At the time of the first poster I created for the organization, the posters were all wonderful photographs but to me, they were lacking energy, especially as there are now over 9000 cyclists riding in the event each year. My first thought was a painting, and I am glad that I ran with that thought which was way better than making something out of pasta and glue, though I still think about that medium. My children look at this first poster and ask me if I know how to draw a bike [I do] but this cyclist was to be all cyclists, neither a racer or a recreational rider, heavy, thin, expensive road bike or old beach cruiser. I painted it purposefully ambiguous. It also happened to be the first year of Lance Armstrong’s return to competitive cycling after cancer, having previously won a single stage in the Tour de France in 1995. He returned to racing in 1998 and I claim no foresight into the rider on the poster wearing a yellow jersey. 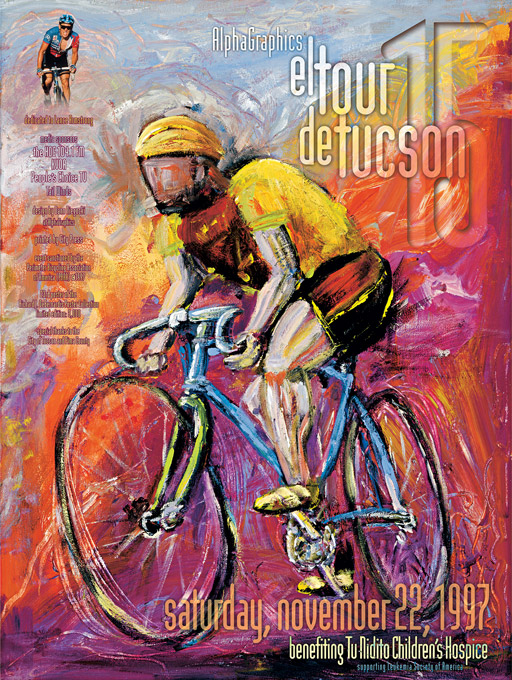 Close up shots of both Lance and the brushstrokes in the painting. 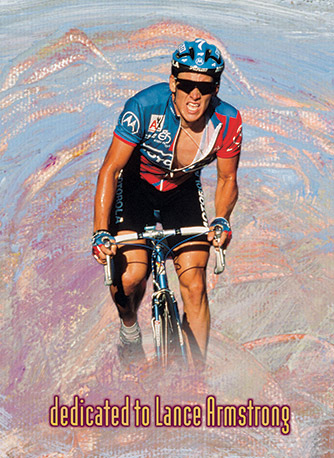 The following year I was asked to do another painting. This was back when the route went clockwise, and though the cyclists would not have seen the atmosphere look like this on the course, I wanted to capture that late November sun in Tucson. The sky is a bit yellow, and the shadows and colors stand out a bit more in the Catalinas – stylized, of course. If you have driven on Sunrise between Craycroft and Kolb, you know exactly where this could be. If you have been stuck in traffic waiting for what seems to be the longest line of cyclists ever created, then you get the idea behind the long strand of cyclists stretching into the distance. If I had to pick my favorite poster, this would have to be it. In more recent years the poster art doubles as the art for the cycling clothing and this would not translate well.

If you happen to be in Casa Molina on east Speedway, excuse yourself for a moment and you’ll find this poster hanging in the hallway leading to the restrooms. 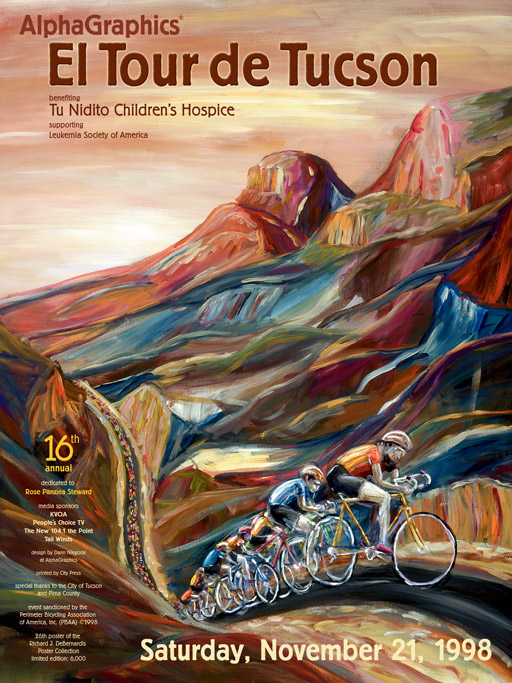 This last poster of the three chosen tends to be the crowd favorite. Not any particular area or barrio in Tucson, it depicts the early start downtown and the brightly colored buildings that are found sprinkled here and there some of the older parts of Tucson. It definitely shows what seems to be the craziness of a pack of cyclists coming through the smaller city streets.

At the time I had very little time, and it was an entirely digital creation. In 2002, that put a lot of hurt on my computer but it came out just fine. If I was ever to repaint a poster, this would be the one, just to recreate it with more detail and brushstrokes. 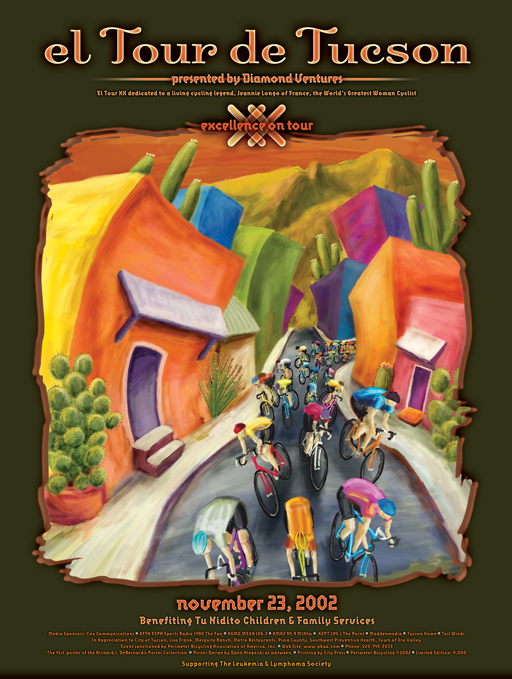